Today’s author in the spotlight is somebody that I’ve got to know while working numerous signing events together.  He writes fast and furious with over 15 published titles to his name, and he hustles just as hard, scheduling signing events all over the central region of Indiana and even in his home state of New York.  He is a multi-genre author, with pretty much something to share for everyone.  I won’t waste anymore time here, so let’s jump right in and learn a little bit more about him.  Enjoy!

George Kramer started writing early in his life. In fifth grade, he started dabbling with his pen and paper. It was instrumental since his writing would serve as a crucial outlet later in life. The venting allowed him to get a handle on his trials and tribulations in growing up with eight other siblings.

George spread his wings and embraced writing in all genres. As it stands, he has over one hundred and fifty articles published online for various websites. He has written two books of unconventional poetry, countless short stories, and eight books of the popular Arcadis series. Additionally, George has written a medical horror book called Blind to Blood and its sequel, Blind to Blood 2: The End Game. He has written a screenplay on both Blind to Blood and Arcadis: Prophecy. Moreover, he wrote a murder/mystery/love obsession book called, ‘To Some it’s Just a Rose’, which is now a screenplay. He is currently writing the sequel.

George was born in Brooklyn, NY, raised on Long Island, is one of nine children, and is a natural born triplet. Currently he resides in McCordsville, Indiana with his wife and precocious daughter. END_OF_DOCUMENT_TOKEN_TO_BE_REPLACED

The next author to be featured in this series has arguably been the biggest influence in my writing career.  Before I ever started the first draft of my first short story, I discovered the work of Patrick J. O’Brian by pure happenstance.  My wife and I took a weekend getaway to an amazing resort that our friends had told us about in southern Indiana.  Tucked into the hills in the French Lick area, the West Baden Springs Resort is a hidden gem in a very unassuming, tiny, rural area.  Once we got checked into our room, we were scoping out the gift shop when I stumbled across a book with an interesting cover called Reaper.  I read the blurb on the back of the book and it instantly grabbed my interest.  It seemed to be a murder mystery/thriller that was set in the hotel, so what better way to get acquainted with the resort than to read a story about a murderer hunting on the premises while you’re staying there? 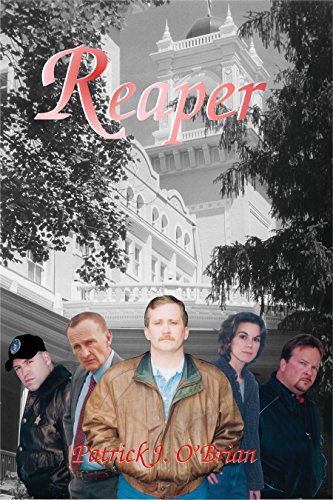 After purchasing the book, I flipped to the “About the Author” section and learned that O’Brian serves as a firefighter in the same town where I worked.  I’ve mentioned before how the thought never occurred to me that authors are mere mortals and not fictional superheroes that live in mansions on the coast, or high-rise condos in New York City, or a luxurious, isolated cabin in the woods.  That was, until I learned about O’Brian.  Being in such close proximity to a published author completely blew my mind.  I went out on a limb and reached out to him on Facebook, asking if we could meet so I could get my book signed and also to talk about writing.  I prayed that he wasn’t too weirded out by my forward request, and he probably was, but he still agreed to meet with me in a very public, well-populated area.  Ever since, he has been a massive inspiration to me and I’d like to say that I consider him a friend at this point.  Whether he considers me one in return is up to him, but he can’t deny me calling him a friend of mine at least!  Enough of my babbling, let’s get to the interview now, huh? END_OF_DOCUMENT_TOKEN_TO_BE_REPLACED

The next writer to be featured in this series is Andrew Miller.  I have been a fan of his for years, so to have him agree to answer my questions was a big deal to me.  The fact that he took time out of his vacation in Mexico City to get these responses back to me just speaks to his dedication and commitment to the craft.  (Although, I’m sure he wrote much more meaningful things aside from this while he was there!)  He’s definitely the most academic writer I know, which I’ll let him talk about in a couple of minutes.  Seeing his journey as a writer has been a huge inspiration for me, and he has been an enormous encouragement to me and my writing as well.  He’s always been willing to help with my projects, and I’ve even been able to give some input for one of his too.  Also, in the interest of full disclosure, I guess I should probably mention that he’s my cousin!  Let’s get started with a brief bio before we jump into the questions.

Andrew Miller is a writer and photographer working from Columbus, Ohio. His writing has appeared in several literary journals including: Two Dollar Radio’s Frequencies, The Fanzine, X-R-A-Y, and has work coming soon in NewFound. Publisher Civil Coping Mechanisms released Miller’s first book, If Only The Names Were Changed, in 2016 and he’s since gone on to co-author the book Turn The Lights On; a resource for recovery from Traumatic Brain Injury.

In his personal time Miller enjoys spending time making art with his daughter, Sophie, and exploring the world with his wife, Gail. They both believe he has a death wish for having taken up skateboarding (again) in his 40s.
Miller is an MFA graduate from Miami University (Oxford, OH) and you can find him online on Instagram @digitalocracy or his website, Andrew-Miller.com.  (Editor’s note: See those letters?  I told you he was academic!)

END_OF_DOCUMENT_TOKEN_TO_BE_REPLACED

The featured author this week is another good friend of mine who also happens to enjoy writing. We have worked collaboratively on recent projects for each other, serving as brainstormers, sounding boards, beta readers, proofreaders, editors, and just about any other role you could assign to somebody without them actually co-writing your project.  His ongoing series, The Chronicles of Erika Lorenz, is a fresh take on vampires and puts a really interesting twist to that timeless lore.  I also get caught up in the situations he creates for his characters.  He’s always really supportive and encouraging to me, and I’m glad to get to work with him whenever an idea comes to mind.  Before we get to the interview, I’ll let Chris share a little bit about himself.

“I work as an IT professional in the US Air Force. I grew up in a small village in Indiana and spend most of my free time with my family and dog. I’ve been writing for the last 11 years. I started writing as a means to get involved with the film industry and found my stories more suitable as novels. I like stories that challenge the characters’ internal resolve.”

END_OF_DOCUMENT_TOKEN_TO_BE_REPLACED

I got connected with this next author through a mutual friend.  I had just started my personal blog and was developing my writing style when a friend commented that he knew an author.  I was enthralled by this idea, as authors had always seemed like mythical creatures to me; fantastical beasts that didn’t intermingle with mere mortals.  In my head they all lived in shoreline cottages, high-rise apartments in big cities, or secluded cabins in the woods, and lived magical lives.  To have the opportunity to be connected with somebody that was actually a published author blew my mind.  And I’m seriously not writing that for entertainment or to be dramatic (like usual).  I held authors on a pedestal in my head and never imagined that they came from all over and led completely normal lives.  Maybe I was a little naive.  Maybe I just think really highly of authors.
Since meeting Jon, we’ve become good friends, and he has been such an inspiration to me on multiple levels.  When I thought of the idea of this series, he was a no-brainer to be one of my first guests.  Luckily, he agreed to do it!

END_OF_DOCUMENT_TOKEN_TO_BE_REPLACED

Welcome to the newest series on my site! Knowing how difficult it is to get your name out there as an aspiring author, I thought it would be a great idea to take on the role of helping other writers gain some exposure and introduce them to as many new readers as possible. I have identified several guests and so far they have all graciously agreed to let me bug them with a bunch of questions! Naturally, when I had the idea to feature other authors, my starting point had to be with my writing partner, Adam K. Moore.

Adam is responsible for penning the completely original and enthralling Compendium Twenty-Three series, as well as helping me co-found Circle City Publishing. In addition to that, he is also one of my most trusted proofreaders, and is crucial in helping me make sure my projects turn out okay.  And not only is he a fantastic writer, but he creates some visually stunning pieces of art too.  That great Circle City Publishing logo? Yeah, that’s all him! He also provided all of the artwork for CCP’s first children’s book, My Ship Don’t Sink! END_OF_DOCUMENT_TOKEN_TO_BE_REPLACED