I don’t know about you, but for me, this quarantine has been a drag.  Staying holed up inside my house all day every day has taken a toll on me, and I have a feeling I’m not the only one.  With that in mind, I decided to play virtual tour guide once again.  Inspired by my last bookish tour around Indianapolis, and even more by my trip to New Orleans, I decided to rock out to some literary tunes, and see what other bookish sites I could come across.  I’ll kick it off with a scholastic location, then we’ll check out a few places that are more social in nature. END_OF_DOCUMENT_TOKEN_TO_BE_REPLACED

Recently, I was fortunate enough to get to visit New Orleans.  NOLA.  The Big Easy.  The Crescent City.  Call it what you want, just be sure to recognize the incredible history and culture the area harbors.  It was a short trip, but there were a few things I HAD to do while I was in town.  No, I’m not talking about bar hopping down Bourban Street.  If you know anything about me, then you already know that’s not my scene.  (Although, I may have ended up bar hopping down Bourban Street a little bit anyway though.  Hey, when in Rome, ya know??)  Actually, the places I had on my must-see list were almost all National Literary Landmarks.  And they most certainly did NOT disappoint. END_OF_DOCUMENT_TOKEN_TO_BE_REPLACED

After my previous tour around Indianapolis, centering around John Green’s “The Fault in our Stars”, I cranked up my literary playlist, and decided to take another bookish tour around the city that gave the world Kurt Vonnegut.

Before we get to the legend himself, it’s important to learn a little about his family and their importance to the formation of the city to fully understand his deep-seated connection to Indianapolis.  Vonnegut’s father and grandfather were both architects, and are responsible for designing some of the most iconic Art Deco style buildings in the downtown area.

END_OF_DOCUMENT_TOKEN_TO_BE_REPLACED

Literary Locations: The Fault in our Stars

I have no doubt that by now you all have picked up on the fact that I am a total nerd.  I’m good with that.  I’m comfortable in my geekness and I enjoy it.  One of the things that never fails to get me excited is to know that pop culture is happening in my immediate area.  Sure, movies, books, and songs are set in areas from all over the place, but let’s be honest – cities like Los Angeles, New York, and Chicago are a lot more commonly used than places like St. Louis, Milwaukee, or Indianapolis.  I’m not delusional.  I know that Indiana is a flyover state and has very little appeal to the rest of the civilized world, which is why my excitement jumps into overdrive anytime connections are made in the mainstream media with my home state.

I’ll always sing Tom Petty’s line about growing up “with them Indiana boys, on an Indiana night” a little bit louder than the rest of the song.  I love seeing Indiana portrayed in movies and TV shows (although the portrayals are usually laughable because the state doesn’t offer tax perks to film here, so it usually ends up being places in L.A., Georgia, or Pennsylvania that get tagged as Indiana).

So anyway, when we do get some legitimate spotlight on our little corner of the country, I can’t contain my excitement, and I inevitably end up going down a rabbit hole of learning everything I can about each situation.  Now I know I’m way late to this party, but I’ve been a John Green fan for quite some time.  His book, “The Fault in our Stars“, being set in Indianapolis and becoming a best-seller was a big deal.  Having the book optioned to be adapted to a major motion picture was an even bigger deal.  Watching that film and knowing that it wasn’t actually filmed in Indiana was a bit of a heartbreaker, but see above.  It’s a lot cheaper for production companies to film in Pennsylvania and pretend it’s Indiana than it is to actually film in Indy.

Taking that into consideration, I wanted to show off the places that are featured in the book, but were misrepresented in the movie for all of the John Green fans who haven’t been to Indianapolis before.  (Don’t get me wrong, the movie actually did a truly great job of trying to keep things accurate, but knowing the differences just isn’t the same.)  Let me be your guide for a virtual “The Fault in our Stars” photo tour of the bookish settings around Indianapolis. END_OF_DOCUMENT_TOKEN_TO_BE_REPLACED

I’ve told this story too many times to count, but I discovered the works of Patrick J. O’Brian by happenstance while perusing the gift shop at West Baden Springs Resort & Hotel.  He had written a murder mystery trilogy (at the time) set in the historic location.  I was fascinated by the idea of reading a mystery featuring the location where I was staying so I gave it a shot.  When I realized we lived in the same area, I fanboyed out a little bit and may have resorted to a small amount of internet stalking.  I don’t really like to use words like “stalking,” but that’s what the police called it, so…anyway.  It all worked out for the best and the rest is history.

That trilogy, aptly named The West Baden Murders Series has since turned into a series of six books with more possibly on the way.  Recently, I found myself holed up in the resort for a work conference.  (Darn the bad luck, huh?? That place is nothing short of amazing!)  Once the daily sessions ended for the conference, I couldn’t resist the urge to venture around the grounds and snap some pictures of locations from the series.  Yes, I’m a nerd, and I’m totally fine with that.  So let’s check out some of the sights then, shall we? 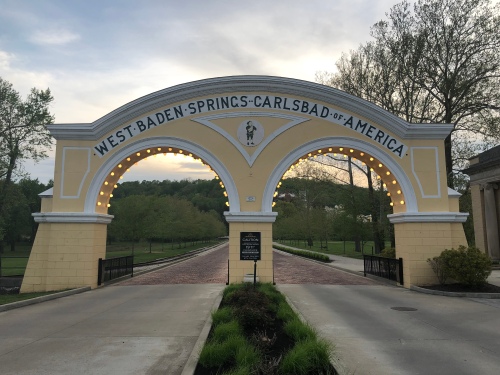 The arched entrance to the hotel. This landmark doesn’t serve much of a role in the series, other than getting a mention or two upon characters arriving at the resort. What better way to kick off a virtual photo tour than at the beginning of the property? END_OF_DOCUMENT_TOKEN_TO_BE_REPLACED