Compendium (noun): a collection of things that have been gathered together and presented as a group especially in the form of a book.

The following short story is in collaboration with Adam K. Moore and is set in the world he created with his first novel, COMPENDIUM TWENTY-THREE: PART I, Through the Valley.

The subsequent companion short stories are meant to enhance and expand that universe in and beyond Independence, Indiana.  I strongly encourage you to check out the original story and fully immerse yourself in the battle for good and evil.

“Wake up,” she whispered frantically, shaking her son awake from a deep sleep.

“We have to go.  I need you to be a big helper and grab some clothes, okay?”  This is not how Caroline anticipated her day starting.

Realistically, nobody expects their day to start this way.  The difference is that most people don’t see the movements in the shadows.  Most people don’t hear the hushed tones of plans for terror being formulated.  However, Caroline is not most people.

“Shh, we have to be quiet.  Let’s play a game.  I’ll wake up your sister and you get your clothes ready and we’ll see who can be quieter.  Readysetgo.”  Caroline stealthily made her way across the room to her daughter’s bed, where her youngest was sound asleep.  She softly rubbed the child’s back while whispering, “Angie, honey, it’s time to wake up.”  The small girl slightly raised her head before lying it back down on her pillow and started to fuss.  Caroline reached over to the night stand and turned on the desk lamp that was used for bedtime stories.  There’s no better way to fight back the shadows than by shining a light directly on the darkness.  Caroline returned her attention to rousing and comforting her daughter.

Across the room, Tommy quietly and efficiently gathered his belongings, clearly not the first time he has responded to such a request.  These midnight expeditions have been becoming more and more regular, which has given Tommy and Angie more practice than any child should be forced to endure.

Since Tommy’s birth, Caroline’s mental state had been in question.  Initially diagnosed with severe post-partum depression, Caroline’s true diagnosis went untreated for years, at the cost of her sanity.  Following Tommy’s second birthday and the announcement of his new baby sister, Caroline’s family grew desperate to get to the bottom of her issues.  She had been evaluated, treated, and prescribed various medications by a slew of physicians and specialists.  Caroline’s father was the CEO of a very successful (yet controversial) construction company in Independence, Indiana, and he was bound and determined to provide the best treatment available to his daughter, including having her committed to a secure medical facility out of state until her faculties were again under control.

Finally, Caroline returned home with a new diagnosis and medication to treat her paranoid schizophrenia.  Unfortunately, the patience of the father of her children was a casualty of the ongoing issues and he was nowhere to be found upon her return.  The financial burden of her medical bills had driven an irreconcilable wedge between her mother and father, leaving her dad and children as her sole support infrastructure.

For the past few years, Caroline took her meds and stuck with her treatment plan religiously.  By following her routine, her symptoms had subsided and nearly disappeared.  The downside of her successful new regimen of therapy and anti-psychotics was that Caroline started thinking to herself that she had everything under control.  She allowed herself to believe that she was in control.  She grew confident regarding her illness, until she was overconfident in her own competencies.  At first, she offered up excuses as to why she couldn’t make it to her monthly counseling sessions.  Always believable, her excuses ranged from not feeling well to attending an event at Tommy’s school.  She was always mindful not to use the same excuse over again, and was even more aware that she needed to make the excuses plausible.  From there, she might “forget” to take her pills one day, which eventually led to not taking them most days, until finally, she stopped taking them altogether.  And that is when she woke Tommy up in the middle of the night for the first time.

“Tommy, do you hear that?” she asked, waking the boy from his slumber.  He woke quickly, startled by her urgency.  “Listen…there!  Did you hear it?”  She didn’t wait for his response.  “They’re watching us, Tommy.  I can see them moving around, sticking to the shadows.”

“Mommy, what’s wrong,” her son asked, shaken by his mother’s erratic behavior.  The young boy had missed whatever it was his mother was experiencing. 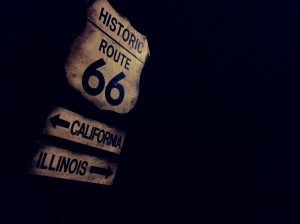 Since then, Caroline had been on the road with her kids, driving randomly along Route 66 from point to point with no goal in mind.  She would stop when she felt
confident that whatever was haunting her had been thrown off of her trail, but just long enough to find an odd job to replenish her gas money.  It never took long for something to spook her and she would gather up the children to abruptly depart wherever they had been staying.

At some point, Tommy started to hear his mom talk about Korvin.  Tommy had never met anyone with that name before. But the way Caroline talked about Korvin, it seemed like he was always present.  Tonight, Korvin must’ve done something to really upset mommy.  As quickly as time would allow, Caroline woke up Tommy and Angie, loaded their belongings in the car, and buckled the children into the back seat.  Once the car roared to life, Caroline stomped on the throttle and didn’t let up, the vehicle fishtailing out of the most recent motel’s parking lot and down the national landmark highway.

Once she had some miles in her rearview mirror, she turned her head and glanced in the backseat to check on Tommy and Angie.  The two children were fast asleep, which is precisely what Caroline had expected.  What she didn’t expect to see was a third body, sitting right between Tommy and his sister in the middle of the seat.  For the first time, Caroline got a good look at Korvin.  The demon sat calmly as his presence registered in her brain.  His skin, a charred black color, was pulled tight around his skeleton and organs.  A pot belly stood out from his very thin frame.  His arm’s length was disproportionate to the rest of his body.  His lanky limbs stretched across the back seat, corralling the two sleeping children’s heads, who were oblivious to the situation.  Korvin smiled at Caroline.  The gesture could only be described as sick, twisted, and deranged, and it made the skin crawl down Caroline’s spine as her whole body shuttered.

Caroline’s attention was brought back to the road as she felt the car leave the pavement of the highway.  As she spun her head around, she instantly recognized it was too late to react.  The car was barreling down on a stand of trees along the shoulder of the road.  Caroline closed her eyes at the moment of impact, unaware that she would never be able to open them again.  The heap of metal surrounding the family was mangled beyond recognition.  Somehow, the entire rear section of the car’s passenger compartment was unscathed.

Since the children had been asleep at the time of the wreck, their brains didn’t force their muscles to tense, allowing the momentum of the car striking the trees to flow freely from their limbs without any substantial injury to either of them.  The kids were pried from the wreckage by first responders, and returned to their grandfather in Independence, Indiana once they were cleared from the hospital.

The cause of the accident could never be determined by investigators. As it was late at night and there were no skid marks that signaled an attempt to stop the vehicle, they assumed the driver had fallen asleep at the wheel.  As the children grew, the mental scarring of Tommy and Angie would be addressed through long-term counseling, but nobody would ever be able to explain the deep scarring of claw marks that appeared on their upper bodies following the accident.