This week, we have a couple more story teasers to get an idea of what the Fun Size Anthology will have in store! The first one is from yours truly! 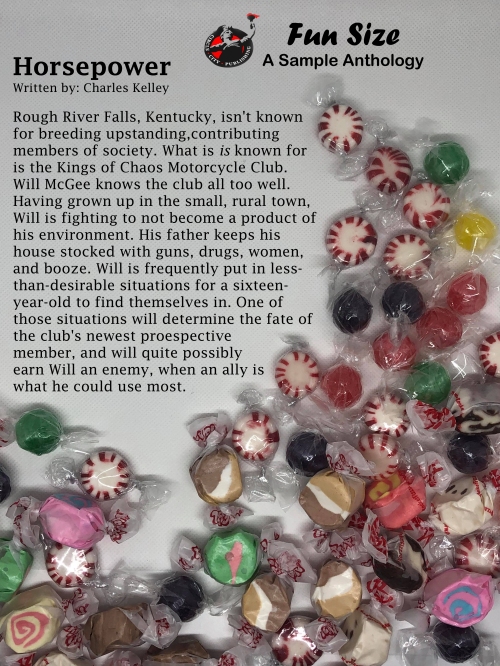 Follow Will’s journey as he flees Rough River Falls, only to be called back to the area in the Kings of Chaos Motorcycle Club Series.  Think of that one biker show from California where the crow flies straight – yeah, that’s the one – if it had a sense of humor and less murder.

Go along for the ride with Will as he finds his calling in life, then faces off with the demons from his past.  His loyalty to lifelong friends and his hometown as a whole will be tested, as he tries to navigate his way through one tough decision after another.  Not to mention all the ramifications from those decisions…

The second teaser this week comes from a close friend, Christian Scully.

In the city of Shelton, Oregon, vampires aren’t just a myth. They’re a reality. An outbreak of a man-made virus, the Vorcino Virus, turned a significant portion of the population into creatures of the night. Each with their own special abilities and powers. The Chronicles of Erika Lorenz follows the journey of a normal college student with a questionable night job as she transforms from a damsel in distress into a war hero and a savior. Everything changes for Erika the night she is attacked by one of these bloodthirsty creatures. After almost becoming a meal, she finds herself trapped in a war between two vampire clans. One wants revenge on all of humanity for years of torture and senseless killing of the vampires. The other is trying a more diplomatic approach. The series focuses on Erika’s internal struggles as she has to overcome the hurdles of those closest to her dying, being captured, becoming a vampire herself, and the other pains brought on by war. The Chronicles of Erika Lorenz is a three-part series with the first two novels currently available.

Be sure to check back each week to see what authors will be featured along with a brief synopsis of their stories that will be in the Fun Size Anthology!