Comic books typically come with a juvenile stigma attached. When people ask what you’re reading and you say Faulkner, you get a nod of respect. However, If you say Ghost Rider, you will likely get an eye roll. (At least, that’s how it was pre-Big Bang Theory, anyway. That show made being a nerd acceptable, and whether you enjoyed the show or not, I think we can all be thankful for it bridging the gap between the cool kids and the geeks.) Most people have no idea that the latest run of Ghost Rider follows a Hispanic teenager/young adult, working as a mechanic to support and care for his disabled younger brother who’s bound to a wheelchair. The character development in most comic books is phenomenal. Iron Man has had struggles with alcoholism, and Green Lantern & Green Arrow have had to deal with the death of a sidekick due to a drug overdose.  The story arcs are broken up into small chunks, but they’re enthralling. They must be entertaining, or they wouldn’t still exist. Just like “regular” books. Besides, they’re called comic “books”, doesn’t that automatically give them credit for being real books? What about graphic “novels”? Any difference there?  The article at this link does a nice job of touching on all of these questions, so I won’t rehash what they’ve already covered.

Let’s take a look at the cover of “Pumpkin Heads” by Rainbow Rowell and Faith Erin Hicks. The first thing to notice is that Rowell is clearly labeled as a #1 New York Times bestselling author. That is a massive achievement for any author, and automatically gives legitimacy without even opening the book. The second thing worth noting is the part where it labels itself as a graphic novel. It very plainly identifies as a novel, but recognizes that there is art involved, which is why they shoehorn the word “graphic” in there. This is obviously just one example of the countless graphic novel offerings, but it makes quite a compelling argument I’d say.

Consider a couple other reputable authors who have ventured over into the graphic novel side of the publishing industry.  Chuck Palahniuk, most notably of Fight Club fame, decided to use comic books to tell his story for Fight Club 2 instead of writing another novel for the sequel to the massively successful book.  While there was a lot of criticism for that series, it hasn’t stopped Dark Horse Comics from announcing plans for Fight Club 3, which Palahniuk will maintain creative control over.  Kurt Vonnegut’s timeless classic, Slaughterhouse Five, is also getting the graphic novel treatment.  How’s that for legitimacy??

Comic books, especially superhero comics, are our modern-day mythology.  Those ancient tales continue to find new life in the pages of comic books.  Superman is the current day equivalent to Zeus.  Aquaman and Namor are the modern iterations of Poseidon.  Wonder Woman is essentially a new take on Athena.  Hell, Ares was used directly as himself in the first Gal Gadot Wonder Woman movie – wreaking havoc as the god of war.  Thor and Loki are direct representatives of Norse mythology.  Sure, they’ve been updated a bit since their creation, but their historical roots are still intact.

Look beyond the subject matter, and you’ll very plainly see the impact comic books has on modern pop culture.  As an author of traditional books, I attend several author fairs every year.  I love doing them and meeting new readers, but the attendance is modest at best.  On the flip side, look at your local comic book convention.  Even outside of the major cons in San Diego, New York, and Chicago, you’ll still find bustling crowds looking to meet comic book creators, writers, and artists.  Granted, there are a lot of people that are drawn just for the celebrity appearances, but I won’t get started on my rant on that today.  (You’re welcome!) Moreover, look at where so much of the inspiration for mega, blockbuster movies is coming from out of Hollywood right now.  Yeah, comic books.

They’re designed to grab the reader’s attention. Don’t you think that would be beneficial for young readers to pull them into reading?  Beyond that, different learning styles require different teaching methods and materials. Not everybody responds to a plain white page with small black lettering. And if the point of great prose is to paint a picture, then what’s so bad about a book that literally paints pictures?? 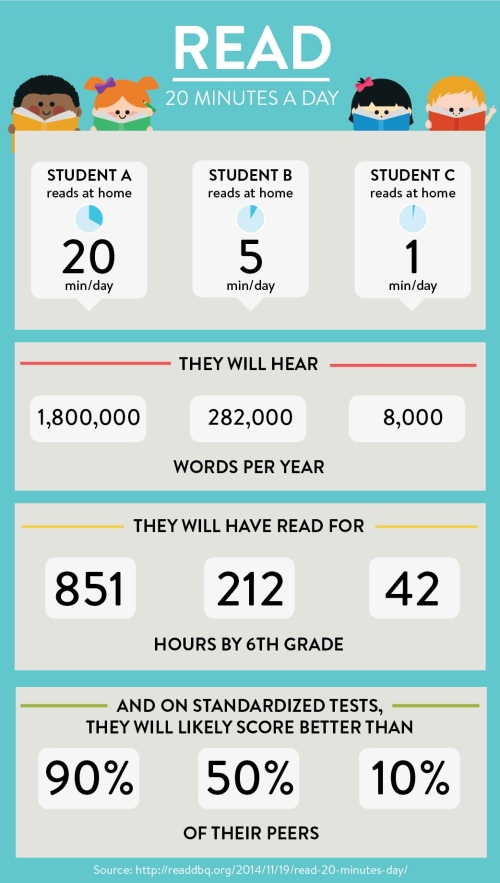 Glance at the chart on the right.  Clearly, reading plays a significant role in a child’s development.  If you can improve their chance at success later on in life, why deter that just because of personal bias?

With that, I’ll rest my case.  And now I ask: Are graphic novels considered legitimate literature, or juvenile comic books?  Be honest when you answer that, and if you’re still struggling, then let me answer for you – they are absolutely a proper vehicle to deliver great story-telling.