As a criminal justice professional, I sometimes get the opportunity to attend national criminal justice conferences. These trips offer a wealth of knowledge and help me learn about national trends throughout the justice system. They also give me some great opportunities to explore some really cool places.

Last year, one of the conferences was in San Francisco, California. I’ve been there before, but only for a day, so I was excited to spend a little more time in the city. My top priority was getting a tour of Alcatraz. It was a bit of an ordeal, but eventually, I was fortunate enough to make it to the island. Once the boat docked, an announcement was made that there was a book signing taking place that afternoon in the gift shop. One of the last living Alcatraz inmates had authored a book, and he was present to sign as many copies as people wanted to buy. I’m a sucker for a signed book, and the fact that it pertained to a federal prison, while I was in town for a criminal justice convention just made it that much better.

I soaked up the sights and sounds of the audio tour while I wandered through the cell house, but my mind was pushing me toward the gift shop 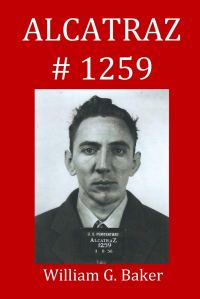 the whole time.  I entered the gift shop and navigated through two or three different rooms and there was no sight of a book signing anywhere.  Then I turned another corner, and there sat William G. Baker, flanked by stacks of his books.  He sat peacefully at his table, signing books and answering questions as tourists from around the world approached him.  I’m sure he’s probably heard any and every question hundreds of times already, but he remained cordial and patient with every visitor, myself included.

Alcatraz #1259 is a very interesting read, and offers more about Baker as a person versus Baker as an Alcatraz inmate, than what the title suggests.  While Baker has found the perfect audience to market his book to, and I commend him for his sales strategy, the book overall is more of a memoir, far beyond the few years Baker spent on The Rock.  Alcatraz #1259 delves deeper into Baker’s story, following him from freedom through several stints of incarceration in various jail and prison systems.

At its best, the book details how prisoners pass their time, exploring the conversations, games, and shenanigans from the inside, including the process of making illegal hooch. At its worst, the book glorifies convicts, failing to recognize the damage their acts cause society as a whole. I really enjoyed the insight from a prisoner’s perspective into the punitive system as it was designed in its time, and the different types of interactions that existed between the guards and inmates. The stories of escape, stealing supplies when the guards weren’t looking, and brewing jailhouse liquor were all entertaining, and illustrate how creative desperate people can get.

Toward the back of the book, Baker details his return trip to the landmark as a free man. He talks about how majestic the once-hated seagulls are, and how they now rule the island. He talks about a trip that was organized for Alcatraz alumni; stakeholders, family members of former prison guards, and former prisoners themselves…two of the last remaining to be specific. He discusses some of the common questions he gets: “What does it feel like coming back to a prison that you spent years of your life in, under horrible conditions?” His response focuses on the passing of time itself. With him having outlived all of the wardens, that kind of makes him the king of the castle, and knowing that makes it a lot easier for him to go back.

Overall, the book was interesting and well written, but the title is a bit misleading. I would’ve really liked more history about time on The Rock itself, but it wasn’t in the cards. Baker’s time likely didn’t align with the major events that occurred at the prison, and I guess those accounts are what I was looking for. All that being said, I’ll give Alcatraz #1259 a solid 3.5 government-issued jumpsuits out of 5.